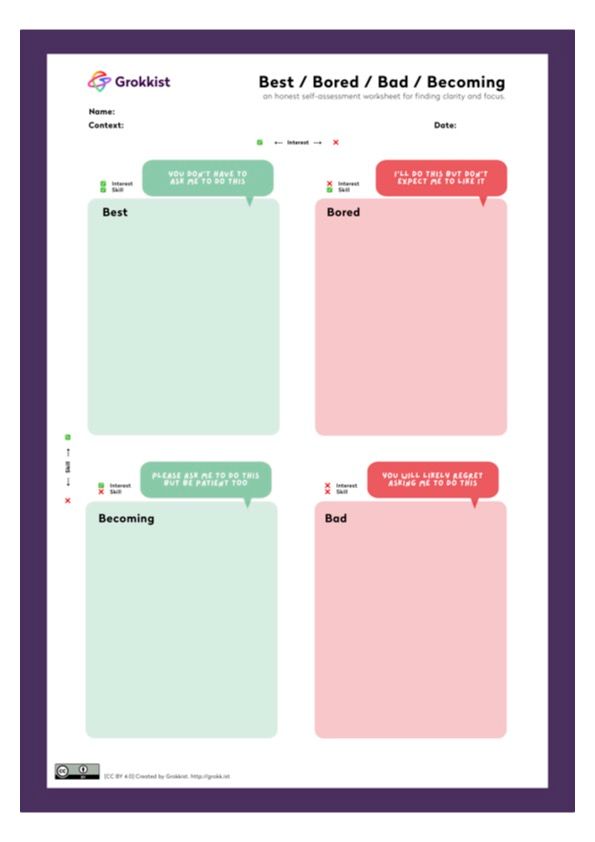 A simple exercise for plotting strengths and interests to help sustain focus on what energises us most.

Have you ever done someone else’s job for them because you got tired of waiting for them to do it, and then people kept asking you to do that job because they decided you’re good at it, but actually you find that job the most boring thing on earth?

Maybe you did that other person’s job for them because you can’t stand to see things done badly, or maybe it was just out of self-interest because it made your life easier to have it done. Whatever the reason, you might suddenly find yourself in a trap of misunderstood strengths and interests!

I know someone who got stuck being in charge of their department’s procedures and process diagrams for years because everyone thought ‘they like that stuff’, but really they hated it and only did it in the first place because they were tired of wasting hours in pointless meetings listening to people argue about what the process was.

In situations like these the distinction between what we feel the need to do and what we find enjoyable become blurred to everyone else. But to those in the experience it's a weight that we increasingly look to escape as time goes on.

The strangest part of the misunderstood strengths and interests trap is that over time we can begin to convince ourselves that ‘I must enjoy doing that thing, because people keep telling me I’m good at it!’ So we end up doing more of it, when actually we’d much rather be spending our time becoming better at something we’re not good at yet. Sometimes years can go by while we watch our possibility space slowly narrow around us while wondering how we ended up here.

It's surprisingly easy to confuse skills with interests, but incredibly important to have clarity about the difference if we want to be focussed about our own personal growth.

I hold a basic belief that when we follow our interests, good things tend to happen. And if they don’t, at least it won’t be boring! So far I have found this philosophy to be a recipe for a life of ongoing adventure with few regrets.

I wondered what would happen if I actually plotted my strengths against my current interests on a simple chart, so I spent an hour or so the other week playing in my notebook doing just that. Here’s the result (I made a nice graphic of it so you don’t have to struggle with my handwritten scrawl). I'm calling it Best/Bored/Bad/Becoming, because who doesn't love memorable categories!

The Best box was easy because it’s the stuff that comes naturally to me – so naturally in fact that if I weren't the kind of person who enjoys doing this sort of exercise, I might fail to recognise my best stuff because it’s so invisible to me.

The Becoming box was harder. It’s stuff that I’m not good at (if I'm honest) but where I can imagine putting in enough time, effort and patience to get better, even if it turns out it’s never going to end up in my Best box.

I found this exercise quite liberating. It helped me answer important questions that had been on my mind about what I should focus on and where I’m better off getting help.

Unsurprisingly, I found it makes most sense for me to focus on my Best and Becoming boxes – the ones where I’m interested. For me, interest is what helps me sustain focus over time.

I admire people who have that particular brand of self-sacrificing discipline and doggedness that gets them out of bed to crawl through the mud at 5am even when they don’t want to. I recognise that they can achieve things I probably never will. But for me, no amount of advice about building habits through consistent discipline is going to work if I can’t find a way to stay interested the whole time.

How about you? You can download a blank template in case you want to do your own Best, Bored, Bad, Becoming exercise. Feel free to share your thoughts!