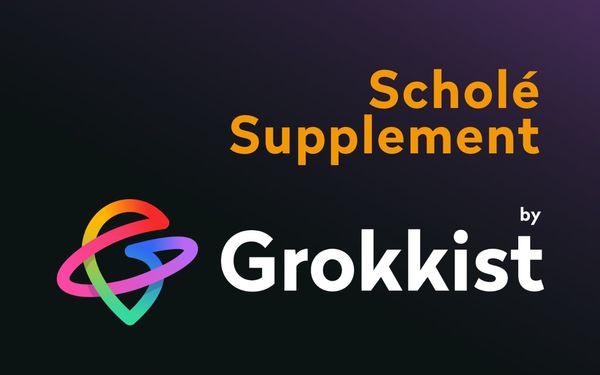 👋
You're reading Scholé Supplement, a free bi-weekly newsletter by Grokkist that celebrates learning as leisure and an end in itself.

Attentive grokkists will recall that I released a podcast episode a little while back with philoso-rapper and TikTok teacher Nathanology, which contained an original song that we worked on together about education and redefining school.

The accompanying music video for the song is now ready and I could not be more proud to share it with you!

No introduction necessary – the video speaks for itself. It is a statement of intent and an anthem for what Grokkist is all about.

Nathan and I would love to hear your thoughts on the video and what resonates with you about it (if anything). We made a little video for you to respond to.

Share your thoughts on the video
🍾
To celebrate the release of the Old School School music video, Nathan and I are holding a free online symposium in July! CLICK FOR DETAILS

Danu's thoughts on learning and bringing ethical imagination to education

The space between people

I am proud not just of the Old School School video, but also of the way it came to be. From the moment I met Nathan, I knew I wanted to work with him on this.

I thought: here is someone bursting with creativity who shares my obsession for care and precision in what to call things, who has a well-stocked memory of concepts and categories and a conscious desire to embody a living tradition of giving voice to things the community cares about.

The project was not quite commission, not quite collaboration. There was no specific brief or set of outcomes, and we didn’t know what we were making exactly. What drove us was simply a deep desire for this thing to exist in the world, and a curiosity to discover what that might mean.

We spent some thoroughly enjoyable time throwing around ideas of everything the song could, should and might be. Then Nathan went to work. We had a few meetings for calibration and clarity along the way, but the song and the video are entirely his creations.

Even though I had complete trust in Nathan, I still wondered what the result might be. After all, how does one fit decades of thinking, life experience and battle scars into a 5-minute song, let alone when it’s about something so abstract?

There is an energy that crackles when you are both working towards something that is both core to yourself, and also bigger than yourself. A spirit of respect and responsibility, each wanting to make the other proud.

It is the opposite of hustle. Instead of doing-something-for-the-sake-of-something-else, constantly spinning a self-inflicted flywheel of productivity in ever tightening loops until your soul implodes, it is rather the pleasure of expending effort and resources on something worthwhile for its own sake.

And here’s the point: the result is better and more alive when you don’t know or force the outcome in advance.

The same is true with podcasting. In one episode of Still Curious, my guest was less than satisfied with how they were able to get their points across. So we re-recorded it, but the result ended up dull and lifeless because we both knew what we were going to say in advance. We compromised by doing more editing on the imperfect version – we both learned important lessons and the result was a more listenable human conversation.

The stuff that matters is what comes to life in the space between people, when there is an ethic of care and curiosity on both sides. Good teachers know this – when they see a teachable moment about to fall out of the sky, they will move mountains and part seas to give it a soft landing.

For me, Old School School is precisely one such teachable moment. It’s everything I feel about education, said better than I ever could on my own. I’m delighted that it now exists in the world. Indeed, it’s becoming increasingly harder to remember a time when it didn’t.

👤
Seth Fleischauer is President & Founder at Banyan Global Learning. Seth's work is at the intersection of technology, language, culture and social and emotional learning. By connecting students to people & places to whom they would never otherwise have access, Seth believes that live video conferencing is an underutilized force of positive, revolutionary change in education. Creating positive change in education is Seth's ikigai, his reason for being.

Talking what it means to design virtual learning spaces that nurture care, curiosity and social and emotional learning. Seth's story of his daughter's homeschooling experience during the pandemic, from initial isolation to emerging excitement, really got my attention (listen from 12:30).

Urban photographer Roman Robroek takes photos of decay where once was luxury, and stillness in places that were bursting with life. Reflections on transience and changing times.

🎧
Something to Listen To

An interactive world map of natural soundscapes that rekindles our respect for nature and connects us with local, grassroots charities that support the restoration of our natural world. Why not spend time with an Australian lyrebird, a seagoing albatross, or a storm in southern Sri Lanka?

#BookTok is driving a resurgence of interest in reading and giving bookstores a new lease on life. Everything old is new again. Lots of good examples in this article.

In the 1970s, disillusioned by the Vietnam War and having lost faith in government and institutions, Noëlla Marcellino dropped out of college and society and joined a Benedictine monastery. She became a nun, then got a PhD in microbiology and became interested in cheesemaking as a metaphor for spirituality. Interesting throughout.

Having a laugh at medieval European paintings where the artist had clearly never seen the animal before.  I found the hyena and turtle particularly interesting.

Grokkist™ is a self-funded social enterprise that celebrates the joy and excitement of sharing knowledge for its own sake, free and for the benefit of all.

We're building a community of learners, educators and practitioners who are curious, creative and committed to finding and designing learning experiences that set the soul of fire. Learn more at the Grokkist website.